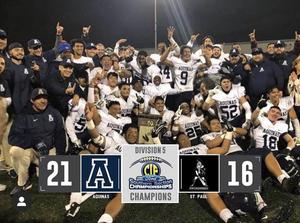 Aquinas Football has won the Division 5 CIF Championship beating St. Paul 21-16.
Congratulations are in order to the football team at Aquinas High School. After making the CIF Championship game for the third time in the last four years, the Falcons were once again victorious. They went on the road, in a hostile environment, to take on the Swordsmen of St. Paul. The game was a hard fought battle between two Catholic schools, in front of a capacity crowd of around 5000 spectators. In the end, the Falcons would pick up their 2nd CIF Championship in the last three years. A special congratulations to the players and coaches for all their hard work this season. Your Aquinas community is very proud of you!!